The Six Most Sophisticated Smart Office Buildings From Across the Globe

Smart phones, smart watches, smart cars – a few years back all these were available in James Bond’s movies but now we are the inhabitants of an age that has incorporated intelligent technology in every bit of our lives. Owing to IoT (Internet of Things), AI (Artificial Intelligence) and sustainability efforts, the whole of the buildings are becoming “smarter” to boost efficiency, performance and solace for the people working inside.

Following are the top smart buildings from around the globe and a few details on how these buildings with a suffix smart have realized their own importance and potential, from improving sustainability, making building maintenance and security process easier, reducing utility bills and substantially more to it.

So, lets know about these wonderous smart buildings NOW A living laboratory for its Internet of Things (IoT) tech, The Watson IoT Headquarters, Munich, Germany officially came into existence in 2017 with an initial invest of $200m. The Watson IoT HQ makes use of cognitive computing, which in literal language means that the building and it’s environ are consistently learning and improving to address its occupants’ needs and issues. Furthermore, the building represents the state-of-the-art smart office technologies, for instance – the IoT knows who sits where and adjust the surrounding temperature and light to their discrete likings. Flaunted with a title of ‘The Greenest Commercial Building in the World’, the Bullitt Center in Seattle, Washington was made operational on Earth Day in the year 2013 and it took a life span of 250 years to create this magnum opus. Some may not find it as visually stunning when compared to its competitors in the industry. However, it is in its’ simple exterior that lies the use of most effective and most inventive energy and water technologies that makes The Bullitt Center one of the most sustainable office building in USA. Owing to these inventive technologies, The Bullitt Center yields as much energy as it uses. It has an onsite rainwater harvesting implementation and work towards offering a healthy environ for its occupants. A smart office complex – RBC Waterpark Place in Toronto, Canada is developed by an architectural firm, The WZMH Architects. The building was constructed to boost employee productivity and satisfaction. The building came into operations in the year 2014 and is the live example of an uber connected office space that help its employees in reaching the quickest elevator, to perceiving the total strength of people in a conference and meeting room, to have simple things done, like – adjusting the height the work desk and make adjustments to the light and temperature as per their individual preferences. Building name ‘The Crystal’ that situates in London, United Kingdom is one of the world’s most sustainable building by Siemens. Opened in 2012, truly it is much more than a conventional office building, where lies the Siemen’s global engineering office space along with a highly sustainable event and exhibition space. With the highest LEED and BREEAM certificates, the building makes use of natural resources for its architectural and energy needs. A highly connected commercial office space, the crystal has over 3500 data points to ensure the optimal working of all its functions at all times. With the goal of increasing employee safety and reducing construction time by 50 percent, Intel SRR3 in Bengaluru, India became operational in the year 2017. The building is a perfect example of system synchronicity intended for providing employee satisfaction. The basic to advance features of the building include – AI that controls air conditioning and ventilation systems, smart interface for the managers to keep a strict eye on energy usage and access to 4-source energy system – solar, the grid, fuel cells and the diesel generator – at the touch of a button, thus improving employee productivity and satisfaction and significantly reducing grievances. The building is the live example of ‘hotdesking’, which means allowing multiple uses of a single desk by multiple employees. With occupancy sensors installed at every workstation, Intel’s smart system helps in workstation allocation while triangulating it with the workstation reservation system.

The Edge | Amsterdam, The Netherlands Industry leaders call The Edge in Amsterdam, The Netherlands, as the smartest office space ever constructed. The building, which is a Deloitte’s new headquarters has a smart phone application for its employees that checks employee’s schedules, assigns workstations based on employee schedule and preferences, allocates strategically placed parking spots that too without any lag time. What’s behind the scenes are the tens of thousands of sensors that gather data, feed the same to the building processes and achieve the real time service info, for instance – which areas can be shut down to conserve energy and which areas need cleaning, etc.

These were the top-rated smart building from the World. These workspaces are the torch bearers of efficient office spaces for others to learn, follow and adopt. 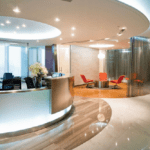 7 must know features before owning Luxury Commercial Space in Noida Know Some Great Benefits of Having a Commercial Space in Noida